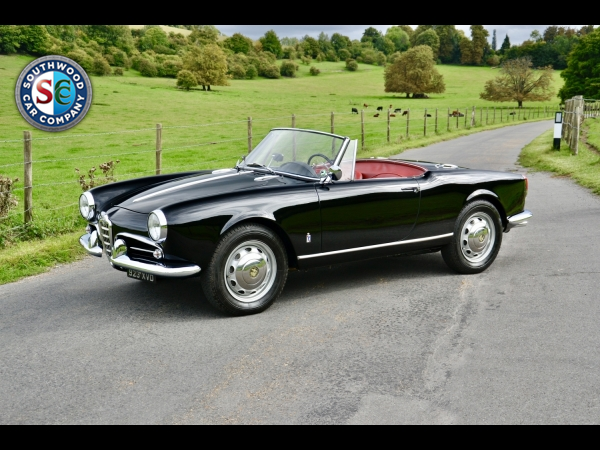 Chassis AR170728 was manufactured on 16/09/1961 in Milano. On 28/09/1961 the parents of Sandra Perkins entered Rezzaghi Motors in Beach and Hyde Street, San Francisco and ordered a new black Spider with red leather interior for their daughter. (Charles Rezzaghi, owner of the dealership sold Ferraris, Maseratis, OSCAS and Alfa Romeos during the 1950 and 60s.)

Buying an Alfa Romeo Spider in California for your daughter in the 60's was, as you can imagine, quite unusual, however it was more unusual than you might think - this daughter was just 15 and had just been accepted to study as an accelerated Maths Major at Stanford University! Not only that, she was also a champion junior show jumper and had saved her winning prize monies enabling her to afford a downpayment on the Spider she had fallen in love with, all she needed were her parents to guarantee the loan for her! Now you were not normally able to drive until you were 17 in California in the 60s, however Sandra managed to obtain a driving licence using a special dispensation to allow students the right to drive to, from and on campus, you get the picture!

Hoffman Motors in New York imported the Giulietta Spider and it arrived at Rezzaghi in San Francisco on 1st April 1962. Sandra took delivery on 1st May after having 3 sessions with Giorgio at the dealership learning how to double de clutch. There is a wonderful letter in the file from the first owner detailing her choice of purchase, history of the car and how her family became hooked and ended up with three Spiders.

The car remained in California until 1994 and today represents a wonderful opportunity for a real Alfa Romeo connoisseur to own a highly original motor car. This is an exceptionally well preserved example of the beautiful Italian roadster which is the Giulietta Spider, the bodywork has never been welded, every panel is original.

In 1994 the first European owner was a prominent and highly respected enthusiast within the classic car scene in Germany who was also a restorer of Mercedes Pagodas. He travelled to California in search of his dream retirement car - a Giulietta with a rust free body. Having viewed more than a dozen contenders he finally chose this example and had it shipped to his workshop and home outside DÃ¼sseldorf. in 1995 he decided to repaint the car in its original colour of Nero. Stripping the car down confirmed the car had never been welded and was completely original. The body was repainted using the best quality Glasurit paint system and the most painstaking rust protection process was undertaken, including cavity waxing everywhere which he had expertly employed on several of his Pagoda restorations. No welding was required and this magnificent paint finish retains its deep lustrous shine 25 years on, a true testament to the quality of his workmanship. There are a few minor chips and blemishes, the inevitable result of careful use, but this gives the vehicle a wonderful patina only achieved with a car of this originality. The body bares the original Pininfarina numbers stamped into the bonnet and boot scuttle and boot floor near the latch. The bumpers are stamped underneath with the sequential numbers fitted by the factory, original factory etched glass, original Carello rear light lenses and original glass Carello front side light repeaters.

The original 1300cc engine was subject to a rebuild at the same time and comes with the car today.

The car comes with a rare, valuable and beautifully trimmed double bubble hard top in silver with red headlining which not only looks wonderful and sets it apart from the rest but makes the car much more usable in colder weather. The gearbox is the desirable 5 speed unit and works beautifully with a light clutch to match.

The German gentleman kept the little Giulietta as his pride and joy together with his two Pagoda's for 21 years until his death in 2014. Carefully stored in the heated garage and occasionally used, it took over 4 years before his son felt able to part company with it. Eventually finding its way into the small collection of a UK enthusiast.

The last UK owner had a general health check carried out by renowned Giulietta expert Chris Robinson of RM Restorations and used the car for several months before deciding to take steps in order to improve the performance and handling. Firstly the brakes were treated to a complete rebuild. The aluminium drums were machined to perfect symmetry. The shoes were relined with modern high performance lining material and all cylinders renewed. The engine was health checked and pronounced sound but higher lift road cams preferred by Chris were fitted. A beautifully restored period correct Weber 40 was sourced and fitted together with an Alfaholics tubular exhaust manifold. Veloce engine mounts were fitted to allow for the manifold and Weber configuration. A new water pump was added together with many other minor improvements. All works were carried out by Chris Robinson himself save for a final tune up by Tom Airey at Airey tuning who found little improvement could be made to Chris's excellent set-up.

The car was then in essentially a Veloce guise and ran sewing machine smooth for another season at which point the then owner, an historic racer, felt that the 1290 cc motor struggled to provide sufficient torque for the relaxed continental touring he sought, especially in the mountains. Seeking a higher level of performance he consulted with Chris Robinson, it was decided that the increased torque and free revving characteristics of a 1750 unit would provide the drive he sought. Chris sourced a suitable engine and carried out a full rebuild, with a first time reground crankshaft (fully balanced), fast road cams, performance enhancing modifications to the cylinder head together with a machined and lightened flywheel. The result is a gloriously smooth and free revving engine producing around 150 bhp, which is far more than is required to propel this little 860 kg car. Chris is well known for the redesigned Giulietta handling equipment he has developed and these modifications have been used here and fettled by Chris. In addition to this he has carried out some some subtle adjustments to the steering geometry to improve both response and feel. The steering idler bushes were also replaced so the car handles superbly and allows full enjoyment of the considerable power on tap. A significant degree of experimentation and investment was taken to achieve the right exhaust note whilst also retaining the original tail box and pipe so as not to deter from the exquisite rear end appearance of the car.

The original engine, carburettor, engine mounts, suspension parts, exhaust system, dynamo etc. have all been carefully removed and stored and are to be supplied with the car at point of sale should anyone wish to return the car back to absolutely originality. All performance enhancing modifications are 'bolt on' and easily reversible. Extreme care was taken to ensure the car's originality was not affected in any non reversible way.

The result is not only a superbly original example with a wonderful patina but a car which is an absolute joy to drive, with scintillating performance and with a soundtrack guaranteed to raise a smile yet not prove tiresome on longer drives. 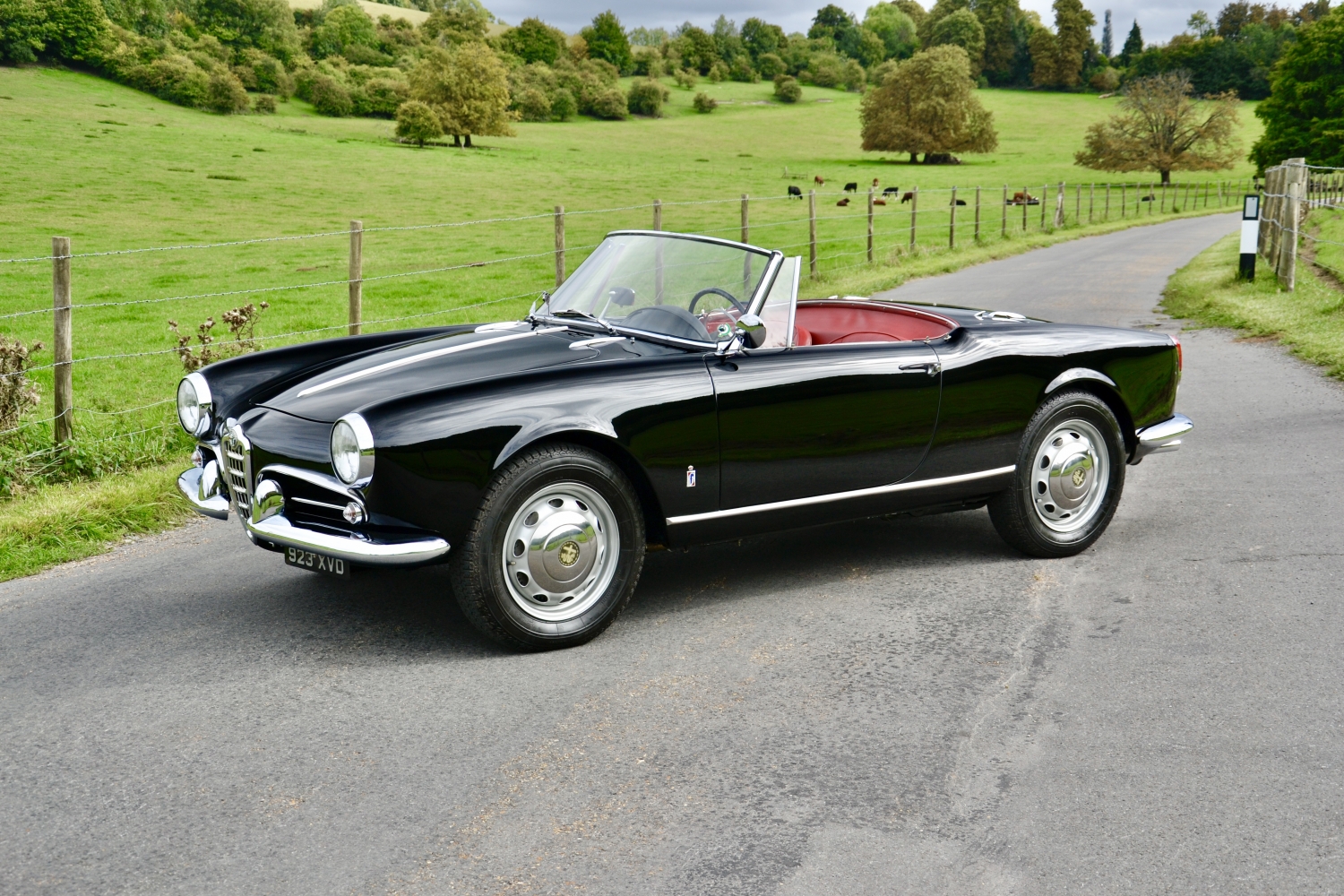