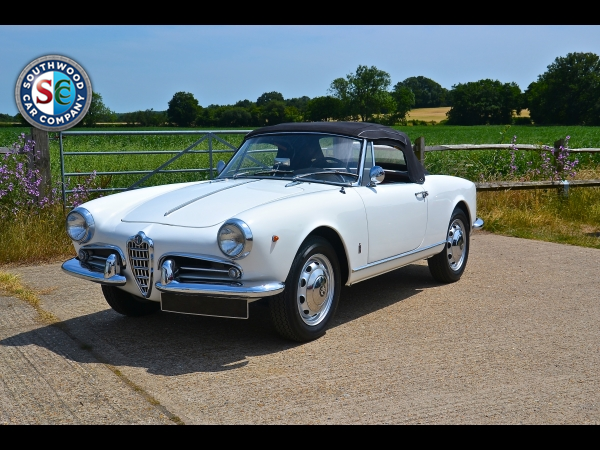 According to Alfa Romeo Automobilisimo Storico, chassis number AR 1495.09489 originally corresponds to an Alfa Romeo Giulietta Spider, manufactured on the 27th April 1960 and sold on the 3rd May 1960 in Beirut, Lebanon with body colour is white and red interior.

This Giulietta Spider is a quite remarkable car which has covered a believed genuine 48,450 Kilometres from new with documentation and history to support. Supplied new, with a red Pininfarina steel hardtop and no soft top, which was later added.

It was purchased new by ii's first owner who was serving at a high level in the British armed forces in Lebanon. As the Alfa Romeo Automobilisimo Storico records state he bought it on 3rd May 1960 and used it in Lebanon until he returned home with the car in 1964 to his home town of Southport near Liverpool where the car was shipped to on 20/07/1964. He used the car in the UK on an annual registration until he put it away in his garage in 1966 with 30,000 kilometres recorded.

It stayed in his ownership and in his garage until 1992 when he walked into his local Alfa Romeo dealer 'Cubleys of Ainsdale' to enquire as to if they would like to purchase it. Cubleys Sales Director was John Myerscough who was a british touring car racer and long term Alfisi. John went to see the car that had been stored just two streets away from his dealership for 26 years and immediately realising it was quite special, agreed to purchase it.

The Spider was in great shape but the paint was tired so he sent the car off to his long term friend Richard Banks of Alfaholics, and asked him to repaint it for him. Richard Banks has confirmed that he remembers the car well and that it was repainted and required absolutely no welding or restoration. As stated above the car was bought new complete with a Pininfarina hard top and no hood, so John sourced and had an original soft top added. Whilst Richard repainted the car John had Westune (his service centre) recommission the engine after it's long lay up, and this remarkable car was put back on the road.

John enjoyed the car for many years, with many trips including a memorable one to Milan with his wife Nicky. Unfortunately John developed Parkinsons decease and as a result, had to pass the car on in 2003 to it's next owner from whom we purchased the car recently. During our research of this car John Myerscough has been described by numerous people as 'one of lives gentlemen' and we think this car stands testament to him. John sold the car with just 46,000 kilometres on it and the last owner added just 2,000 kilometres in 12 years as for the last 5 years it remained in his garage unused.

We have recommissioned this remarkable Spider, overhauling the brakes system, suspension and ignition system. This car appears to be completely original in all respects, retaining it's original seats, carpets, vinyl floor coverings, rubber mats. It drives faultlessly, beautifully light, nimble and smooth.

With normally only restored examples available this original, unrestored, unwelded Giulietta Spider offers what we believe must be the lowest mileage, most original Spider available anywhere and is a remarkable car for someone to add to their collection.