VIEWINGS BY APPOINTMENT ONLY PLEASE.

Sorry, deposit now taken, subscribe to our stock updates to keep up with new arrivals.

We are pleased to present this rare factory right hand drive Giulia 1600 Spider Normale, one of only 400 originally produced.

First sold to a Mrs A Poyser of Marks Tey, in Essex this rare Spider comes complete with its original stamped service book and a good history file detailing just six owners to date.

Documentation shows that the car remained in The South of England and was returned early on several times to the supplying dealer for servicing. In 1987, after several long-term owners, Lynne Doyle and Nick Smith of Woodham Ferrers, Essex purchased the Spider. Nick Smith was a race engineer of some note who owned Swallow Engineering of Basildon Essex, he had great experience of Alfa Romeos and at the time he was restoring a RHD Giulia 1600 GTA. It is believed that Nick fitted a twin carburettor set up on the Spider (now removed, read onâ€¦).

Ms Doyle and Mr Smith owned the car until March 2005 when Simon Brawer purchased it. Mr Brewer had the car regularly maintained by well-known Italian marque specialist DTR European Sports Cars of Coulsdon in Surrey. Experienced in all matters Giulietta / Giulia, DTR advised Mr.Brewer that the conversion of a Normale Spider to twin carburettors is actually not advisable for a number of reasons, most notably the risk of fire.

Mr. Brewer's decision not to act on the advice of DTR unfortunately proved to be a mistake. On July 24th 2010, he took his Spider to play cricket at All Saints Fulham, just as the match got underway, smoke was seen coming from under the bonnet and the Fire Brigade was called in a hurry. DTR's prediction had came true; the carburettors caused the fire, which was limited to an area of paint and wiring damage in the engine bay.

The car was returned to DTR and after assessing the damage it was agreed with Mr.Brewer and his insurance company that DTR would purchase the Spider and restore it. There was no damage to panels, just to the paintwork and wiring, so DTR stripped the car and carried out a full repaint inside and out. From the mechanical side the original engine was completely rebuilt with new pistons and liners, new bearings, full crankshaft balance and a rebuild of the cylinder head with new valves and hardened valve seats. A new wiring loom was fitted and the engine was returned to its correct single Solex carburettor set-up.

On completion in March 2011 DTR Sports supplied the car to a new owner from Dorset, with the speedometer reading of 85,800 miles. The car was used often by him and maintained to a high standard. He further improved the Spider by having a new soft top and a stainless steel exhaust fitted along with a gearbox overhaul.

In 2014 the car to took part in the Northern Italy tour arranged by the Giulietta Register to celebrate the 60th anniversary of the Giulietta launch. The trip also included attending and spectating at the Vernasca Silver Flag hill climb before returning to England without any problems. That trip was closely followed by a Giulietta Register trip to Wales. Having covered 8,700 miles during his three and a half years ownership, soon after the Welsh Tour the gentleman decided to have a change of Alfa Romeo and the Spider was supplied to the last owner who has enjoyed and cherished the car since.

Presented in excellent condition throughout this rare, well-maintained Giulia Spider has a good history file with many photographs of the restoration work carried out.

Please call for further details or to arrange to view 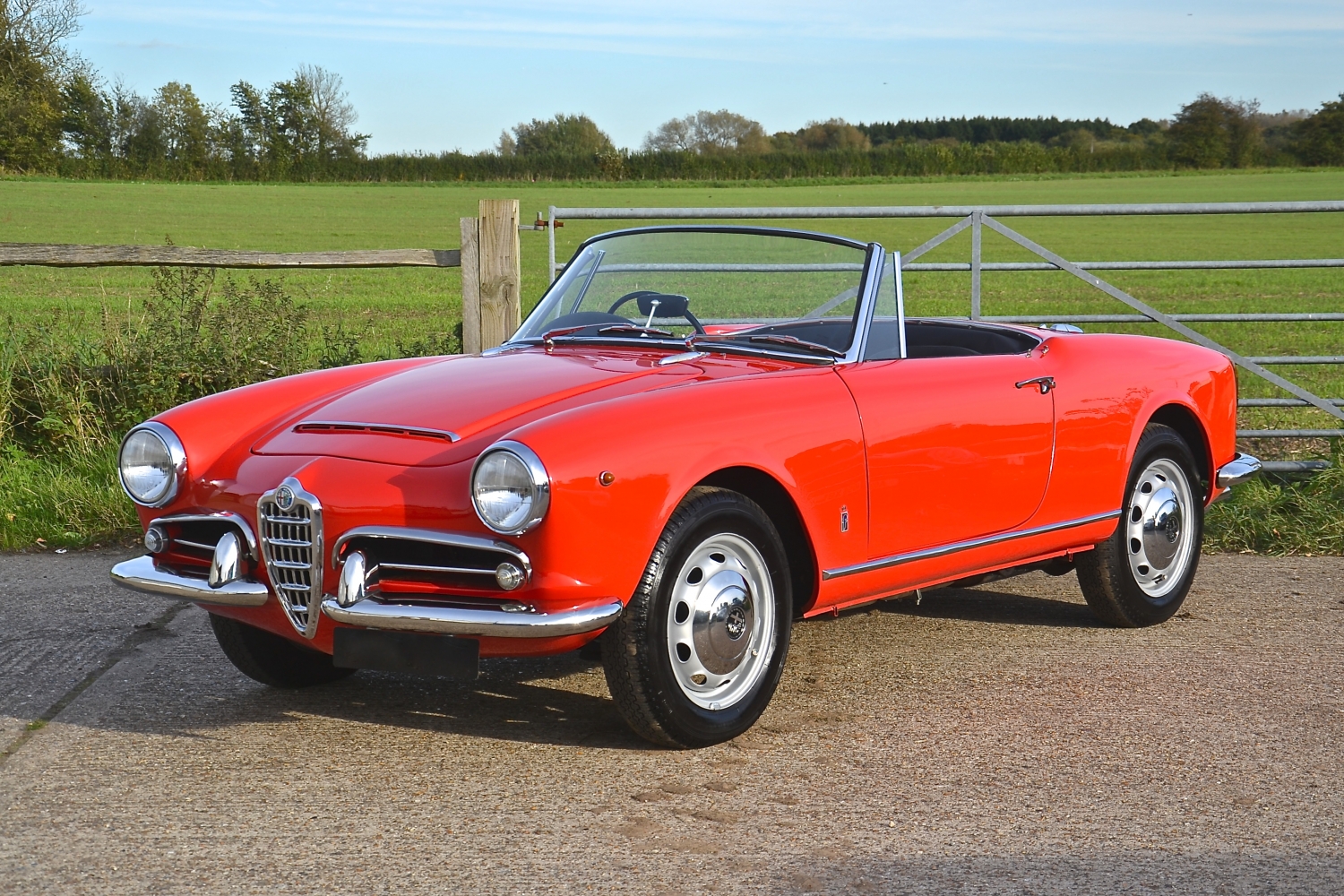